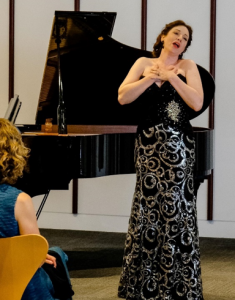 Puccini’s lesser known work, La Rondine with libretto by Guiseppe Adami, has been announced as the inaugural production for the newly launched Canberra based opera company, National Opera.

The announcement was made at the formal launch of the company at the National Portrait Gallery last night, Thursday 6th February. Artistic Director Peter Coleman-Wright AO said he had selected this work as it has a terrific score with many roles (especially for females) and he was sure Canberra audiences would love the music, especially the most famous aria Chi Bel sogno, which was performed at the launch by Rachael Thoms. In 1913 Puccini was commissioned to write an opera in the style of a Viennese operetta.  La Rondine is a beautiful score which uses modern dance rhythms such as the tango to denote the various characters. It premiered in Monte Carlo in 1917 to considerable success from the public and the press alike and has seldom been staged in Australia.

An Australian Cultural Fund fundraising project was announced at the launch. Donors are encouraged to donate via http://www.australianculturalfund.org.au/projects/la-rondine/ to receive a tax deduction for their donation.